Clarissa Costanzo, a soprano with an inner cry

“Uno alla volta… per carità” is a series of interviews presenting the young talents in the opera singers course.

Today it was our pleasure to speak with soprano Forooz Razavi, who has lived in Milan (with her two cats) since November 2018. She holds the distinction of being the first Iranian student in the history of the La Scala Opera Academy…

LET’S START WITH YOUR ITALIAN: YOU SPEAK IT SO WELL!

Thank you, but I actually began studying it a long time ago. I had the chance to take a few courses when I was at the Conservatory in Vienna. They weren’t advanced or intensive, but I managed to learn something nonetheless.

I studied French at school when I was 13 and so jumping into Italian was not such a shock. The sounds and writing seem similar to me, and they share the same alphabet, so I didn’t have too much trouble. 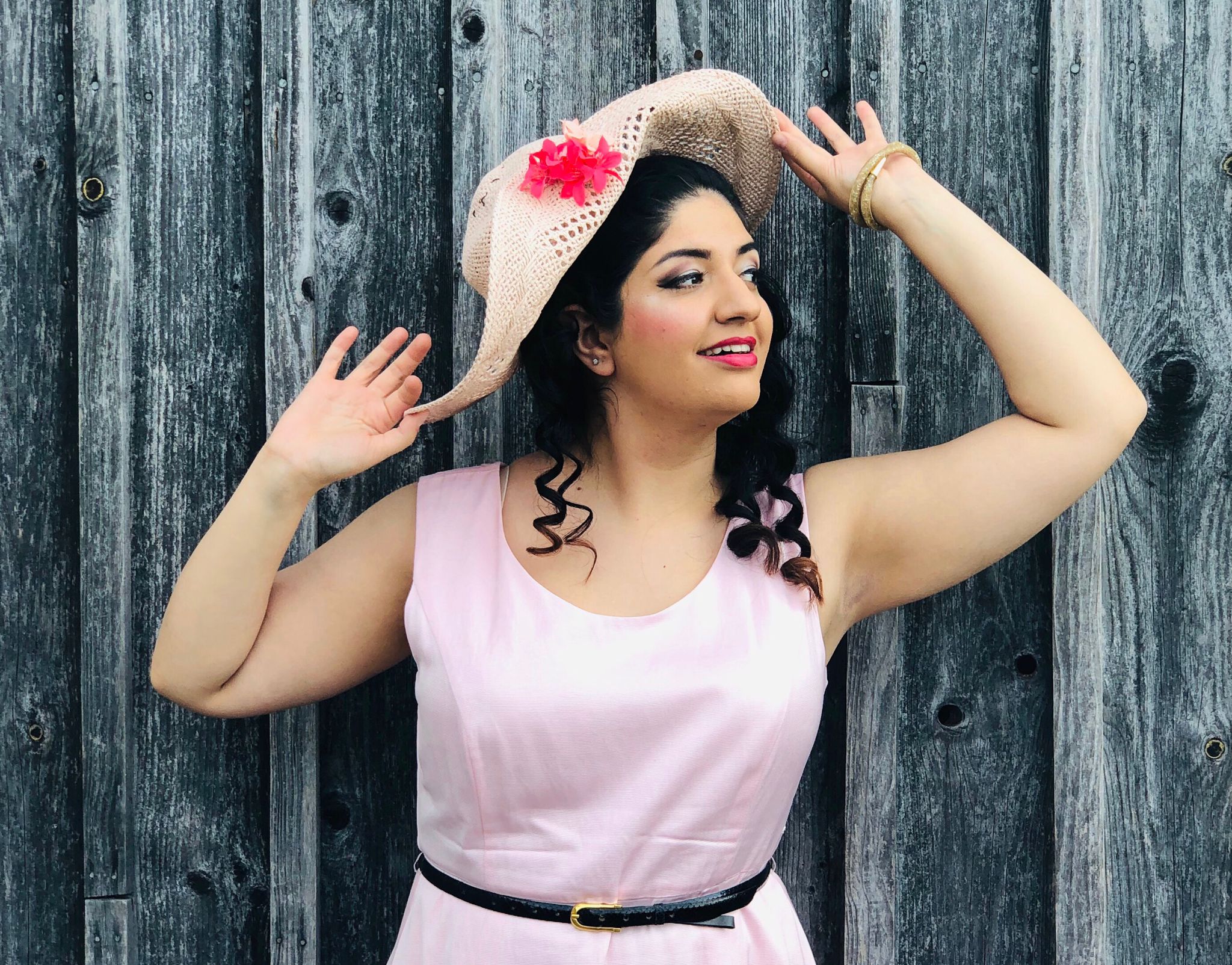 TELL US SOMETHING ABOUT YOUR ORIGINS…

I was born in Kermān, an important city in the central part of Iran. I lived there for 17 years before leaving my country. It was where my relationship with music began…

ARE YOU TALKING ABOUT IRANIAN MUSIC OR WESTERN MUSIC?

Both, to tell the truth.

My father was an amateur singer of traditional music, while I studied violin for seven years. And I sang too, but it was folk and jazz, and I even had a band! They are still together and quite well known – they are called “The Wantons”. I was the lead singer; it was an important experience that added intensity to a good period in my life.

But you know about the condition of women in Iran: you are there, singing, but no one knows that it’s you, women are always put to the side. I felt that I would find something better than that as an artist, it wasn’t enough.

AND THEN YOU DISCOVERED OPERA

Exactly. Then I met my first operatic voice instructor, the Iranian baritone Ardalan Jabbari. He taught me how to sustain my voice, and everything else. He discerned a possible career for me at a time when I did not yet think that this could be my life. Not long after, I followed his advice and left Iran for Austria. In Vienna I had the chance to see La bohème at the opera house. That was the lightning bolt, the moment I realized that I had to become an accomplished opera singer.

So I stayed in Austria to develop my talents, initially spending four years in Vienna and then three in Salzburg at the Mozarteum.

It was very demanding, especially financially: at that time scholarships were normally only given to Austrian students – or European at any rate – and thus out of my reach. And I certainly could not count on help from my country! We had a new president who had begun to introduce sanctions against immigrants, and I was abroad learning Western music… Fortunately I always had my entire family behind me. On my father’s side they are all engineers and on my mother’s all doctors. So I am sort of the “black sheep”, but they saw that opera singing was my true passion and they all supported me; Daddy first and foremost, he helped me every way he could.

HOW DID YOU DISCOVER THE ACADEMY?

My teacher encouraged me early on to take part in competitions and master classes even though I was not yet mature. He told me that it was not enough just to be ready, I also had to meet other singers, measure myself against as many artists as I could, find my own path and direction.

The competitions were part of my development.

I took part in various auditions and opera studios, starting when I was 18, and I met a lot of young singers. But I always noticed that those who had studied at Accademia Teatro alla Scala always had something different about them, something extra that made them stand out.

I don’t know exactly how to define it, but you could see it. And I always saw it, so I found myself nurturing the dream of someday perfecting my own talents at the La Scala Academy. I would visit the website and get lost in reverie! And as soon as I could, I signed up for an audition, so I could dream even more…

When I saw that I had been admitted to the finals I couldn’t believe my eyes!

I was excited, confused, euphoric, and that alone was almost enough, I felt I had achieved something great and was ready to return to Vienna. But then they started telling me that I was the first Iranian to make it into the final round and so I told myself that I had to be admitted, there was no other choice.

And so I went into the final round with this mix of emotions. I brought my war-horse, Lucrezia’s aria from Act 1 of I due Foscari (it had been love at first sight at the “Voci verdiane” competition) and then “Morrò, ma prima in grazia” from Un ballo in maschera and an aria from Die tote Stadt, which was part of my repertory in a language other than Italian.

Ms. D’Intino then asked me to sing an aria from I lombardi alla prima crociata, which I had included in the initial application phase of the competition. Secretly I was very happy about this request, because I immediately thought it was ideal for showcasing my voice.

It was a unique and intense experience. I kept thinking that all the great names in opera had sung on this same stage. It was an indescribable sensation and I already felt so fortunate just to have gotten that far, but at that point I wasn’t going to stop.

TELL US ABOUT STUDYING WITH MS D’INTINO

Studying with her was a great honor because she is one of the finest singers in the world, both technically and vocally. She is so talented that it really is a pity in one sense that she left the stage so early: there was a whole world of things to learn just by watching her. But in another sense, we have her all to ourselves!

Working with her is very demanding, because she always asks more of you, you never reach the end.

This aspect, combined with the generosity of her teaching and her forthrightness, is something I like very much, because she always pushes us to overcome our limitations. There are many maestri who think that by flattering you all the time they can make you do better, but I think what is needed is honesty, particularly because the world of the performing arts, outside of the classroom, can also be very cruel.

It is not easy, it is not easy to hear, but it is extremely necessary. Ms. D’Intino is direct, but as I was saying, she is also very generous, a true guide – she does not leave you stranded in the middle of the desert but gives you the right sort of push to improve.

Thanks to her, I learned how the opera system works, what sort of relations there are between theatres, for example. And that is as necessary and fundamental for a singer as singing well. 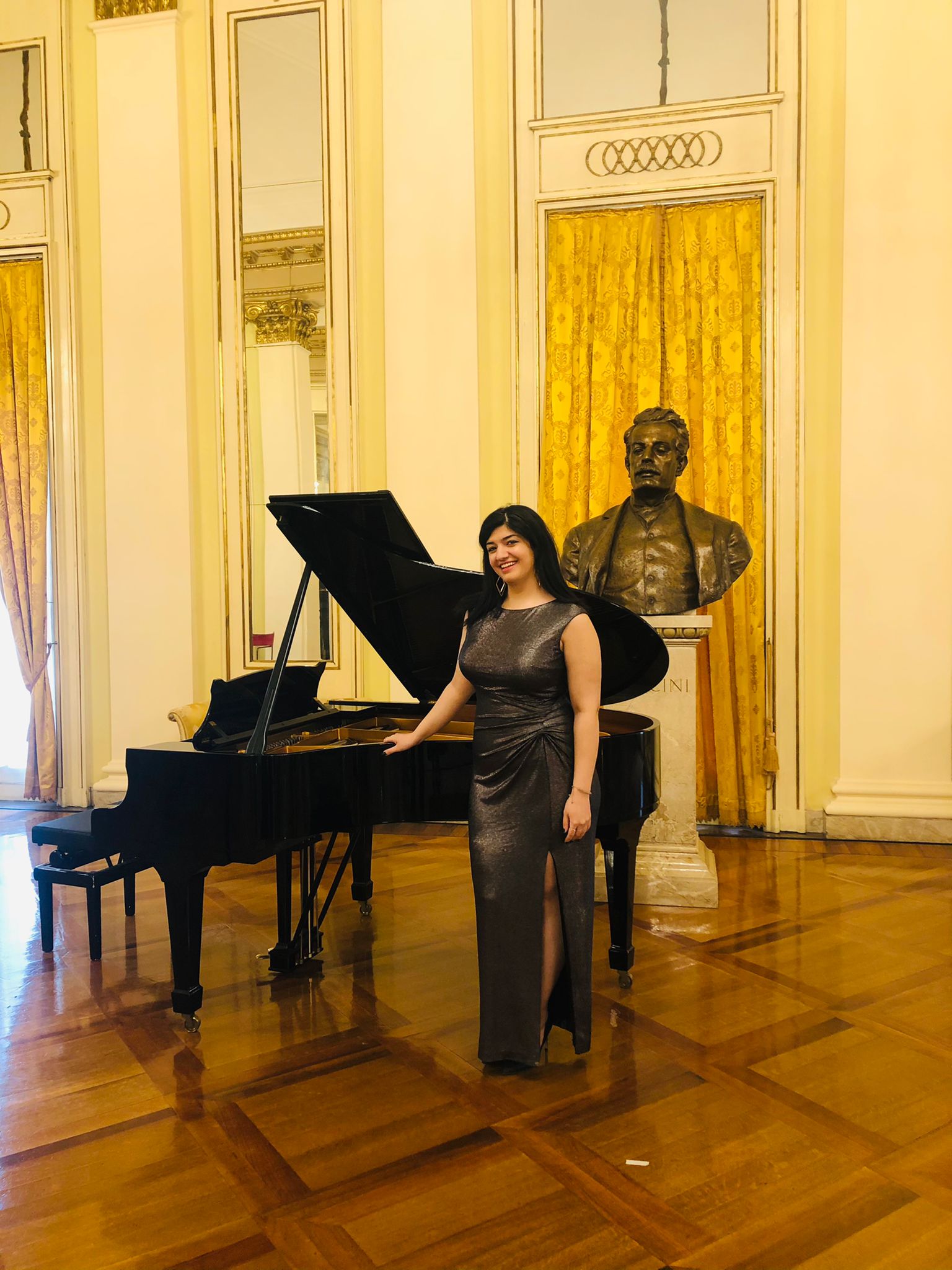 When she proposed this aria by Massenet for the concert “Femmes Fatales” it almost seemed like she was deliberately challenging me, because it is normally sung by mezzo-sopranos. But I immediately loved that oriental flavor evoked in Cléopatre, a rather unusual melody in opera. But most of all I was interested in measuring myself against the challenges this exotic aria poses for the actor.

I think it is a piece that demands qualities of a thespian, not just of a singer; Cleopatra is a truly particular and complicated role to interpret. I accepted the challenge with a big question mark in my head, I did not know if I was capable of doing it well…

“Femmes fatales” was truly a strange event, a concert given online during the lockdown. It was not easy. Although you might not imagine, the relationship with the audience is fundamental.

It is exactly the opposite of what many people think: they think that those who are on stage want to focus on their roles without seeing anyone, without being “disturbed” by the presence of the audience. It’s not true. Seeing the eyes of the audience, meeting their gaze, is fundamental because being an artist means finding a relation. And in the past months this possibility has been diminished. Singing live means above all hearing live, if we may say so, hearing the people, receiving the energy they give off. Without an audience you feel a little less an artist, the show is a little less spectacular, the concert is not quite so radiant, there’s no question about it.

VOCAL TECHNIQUE AND ACTING: WHICH OF THESE DO YOU FOCUS ON MORE IN YOUR STUDIES?

It is a difficult question. It depends a lot on the roles because there are some that naturally demand perfect vocal technique and, if you don’t have it, you don’t any basis for bringing home something decent. Some roles might have a simpler part but involve a lot more in terms of stage presence, requiring greater sensitivity, intuition, and generosity. These qualities allow you to play with the character and mask some small technical imperfection. But you really need both to be complete. Generally speaking, if you have perfect voice technique but are lacking something in terms of stage presence, you have a wider repertoire to explore, while if you are an excellent actor but a limited singer, in the end you won’t do much. So I am increasingly focused on technique, I think the rest comes naturally through daily work and the guidance of great artists.

So, as I see it, technique is much more important; that is part of the reason I took up the challenge of the Massenet aria, to understand how far I could push myself and where my limits still lie.

WHO WAS YOUR GREATEST INSPIRATION DURING YOUR DEVELOPMENT?

If we are talking about opera, my list would be endless! The first names that come to mind are obviously that of the great Maria Callas, and also Elena Obratzsova and Ghena Dimitrova, as well as a man, Ferruccio Furlanetto, a true giant.

But I also have a few idols from pop: Beyoncé first and foremost, but also the legendary Michael Jackson!

IRAN, AUSTRIA, FRANCE, ITALY… WHAT DO YOU MISS ABOUT YOUR NATIVE LAND? WHAT HAVE YOU FOUND HERE?

I have lived in 4 countries but visited 30, a total of some fifty cities and I can say that Milan has a very special atmosphere. It has its own character, so to speak, and I really like it!

But of course Iran has something I can’t find anywhere else: it might seem trite, but I mainly miss my family, and then Iranian hospitality. To us, the guest who enters our house is truly sacred, in a sort of time-honored way, and is welcomed in a way I have never seen anywhere happen else in the world. That’s something I really miss…

WHAT WOULD YOU SUGGEST TO THOSE WHO ARE ASPIRING TO THE UPCOMING VOICE COMPETITION?

To be ready when you arrive, but above all to be yourselves. No fiction, no aping others. You have to give your best, but in a natural way, with all your rough edges in view.

If you have talent, it will be the Academy to polish them!