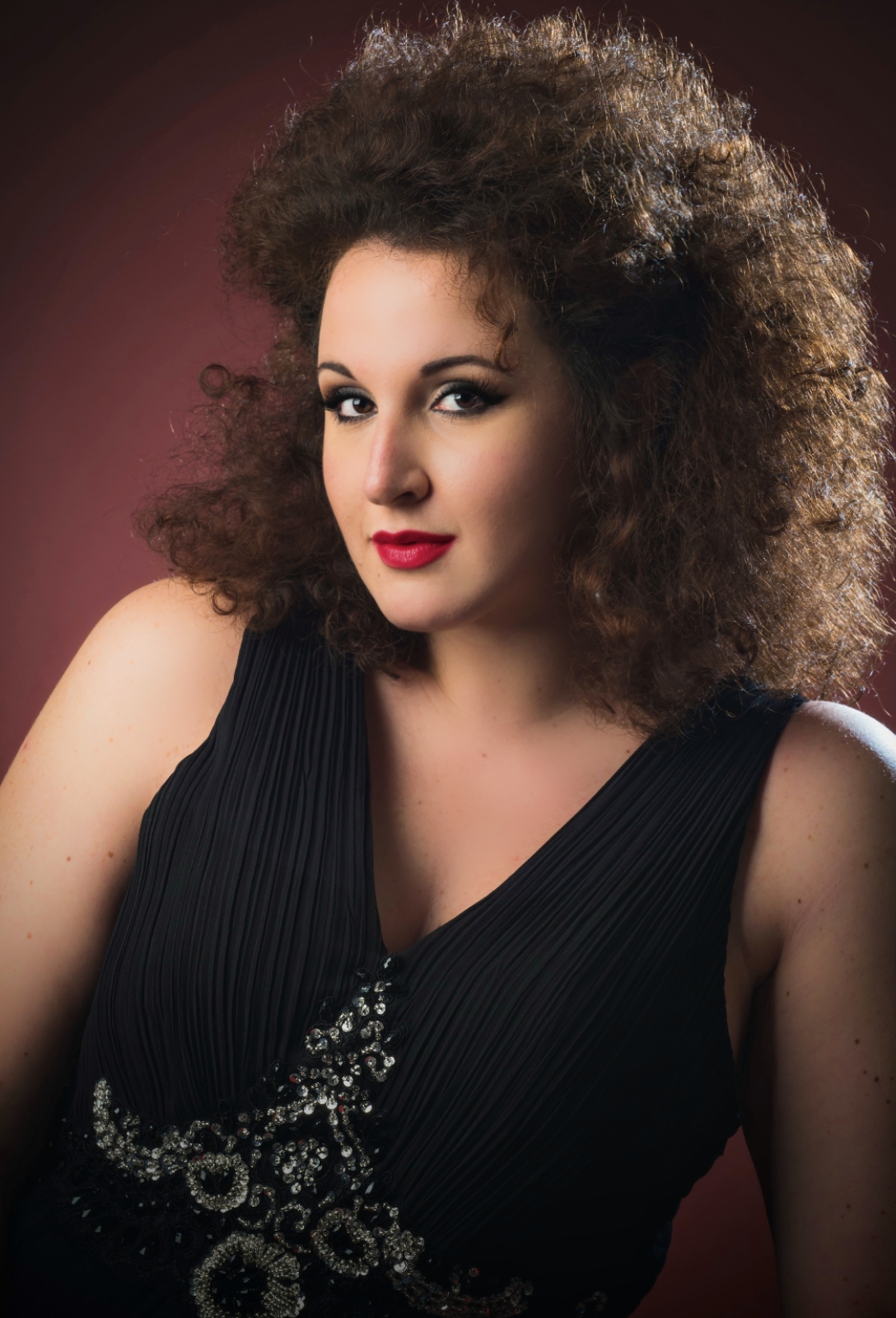 Clarissa Costanzo is a young Italian soprano. Born in Capua, a town near Caserta, in 1991, she studied at the San Pietro a Majella Conservatory in Naples, graduating in 2014 in Voice with top marks and honors. We meet her today as a student at the La Scala Opera Academy.

Can you tell us about the origin of your passion for opera singing?

I started studying voice at the age of 19 and only realized my predisposition for opera singing two months before I entered the Conservatory in Naples, where I would graduate in Voice. I began singing by imitating the big pop singers of the ‘90s like Whitney Houston, Mariah Carey, and Celine Dion, very popular at the time. But one day my singing teacher told me that I was well suited to another style and recommended I try opera singing.

As Sylvia Plath wrote “I am inhabited by a cry”. I can now say that, for me, music and singing are a need as well as a passion. I was very insecure growing up and during the period of my parents’ separation I suffered greatly from an inability to communicate the way I wanted and express how I felt. And so music became the principal instrument for communicating with others. My voice allows me to come into contact with myself and with the people who listen to me. It was a form of personal therapy to keep from being anonymous.

How has your relationship with the audience changed over time?

I have always been very shy. If I had not sung, my voice would probably have been transparent. The first time I went on stage I was ten years old; I sang a song by Whitney Houston. I was certainly a lot more reckless then, but to my great surprise I found I was not worried at all. Instead I was able to express myself on stage without being afraid of standing before an audience. Now my stage presence has changed

completely, I am more aware of my voice and the importance of making emotional contact with the audience. And I would say that for someone in this trade, going onto stage is really what gives meaning to everything: the years of study and great dedication can sometimes produce fatigue, bitterness, or moments of discouragement, but you are paid back by the love the audience shows you when you are on stage. When there is a good energy in the theatre, the artist will feel it and certainly perform better.

What models do you aspire to?

It may seem trite, but I have always been inspired by Maria Callas. And I have often fallen in love with voices that I hear for the first time in the theatre. For example, I was once in San Francisco and I heard Lianna Haroutounian, an Armenian soprano, perform the beautiful aria “Un bel dì, vedremo” from Puccini’s Madama Butterfly. I fell totally in love, I was smitten. I have always been inspired by all those artists who stir up strong emotions in me when they perform. Opera is not an art that comes solely from the ability to bring your vocal skills and virtuosity to the stage, but especially from that of arousing emotions and sensations in the audience, and sometimes even troubling them.

What were your first roles?

I had the fortune of working a lot after I graduated thanks to the help of an agent who saw me perform in a concert and offered to work with me.

In 2013 I was Madame Lidione in Dialogues of the Carmelites by F. Poulenc at the San Pietro a Majella Conservatory, directed by Serenella Isidori in collaboration with the Teatro San Carlo of Naples.

From February to June 2014 I worked in the As.Li.Co OperaDomani project Aida: amore è coraggio, which gave me the chance to debut in that role in many theatres, including the Teatro Sociale of Como, Teatro A. Ponchielli in Cremona, Teatro degli Arcimboldi in Milan, Teatro Verdi in Pordenone, and the Teatro Comunale of Bolzano.

From October 2015 to January 2016 I was Suzel in Mascagni’s L’Amico Fritz, directed by Maestro Leo Nucci and conducted by Maestro Donato Renzetti at the Teatro Municipale of Piacenza, Teatro Alighieri in Ravenna, and the Luciano Pavarotti Teatro Comunale of Modena.

I met him for the first time at the Teatro di Piacenza, it was an unforgettable experience. It was a period when I spent a lot of time studying, both the libretto and stage presence. I was young and, to tell the truth, always used to improvise a bit on stage; I was still very callow, especially in my relationship with the audience. But one night while I was performing, I began to hear them calling my name, “Brava, Clarissa!” They were getting to know me and I realized that I had made it into their hearts. They must have sensed something authentic in me, something that to me is absolutely essential, also when I am a member of the audience. I think that the essence of true talent in an opera singer is being able to convey their soul to those who are listening.

How did you come to be at Accademia del Teatro alla Scala?

I had already been working for a couple years but I chose to embark on this path of specialization. As I said, I have always sought to perfect my talents and achieve the highest degree of preparation in my work. And so I decided to take part in the Academy auditions. I brought pieces I had already sung in the past, arias from Un ballo in maschera by Giuseppe Verdi and from Mosè in Egitto by Gioachino Rossini. I was very nervous and excited, especially when I stepped onto the stage at Teatro alla Scala for the final. It was my first time in that prestigious venue. I saw other singers crying and being overcome by panic and anxiety… I tried to stay as calm and concentrated as I could, I didn’t want to ruin this great opportunity.

The Academy introduced me to top-level maestri and gave me intensive training through an alternation of classroom lessons, regular individual and group exercises, and various master classes … all important moments of growth. I have fond memories of the master class by Marcelo Álvarez in preparation for a concert at the Arturo Toscanini

Ridotto dei Palchi in Teatro alla Scala. It allowed me to improve my command of breath and sound, and my ability to listen to my body in order to produce the best sound possible. But it was also a very sad moment because it was the last performance open to the public before the closure due to the COVID-19 pandemic.

What is your enduring dream?

I would really like to undertake the role of Lady Macbeth on the stages of certain international theatres such as the Sydney Opera or the Met.

Some time ago I was given a nice good-luck cornicello, but I always forget to bring it with me! But I don’t have any good-luck rites. I prefer a good makeup artist who helps me relax and maybe read a little in the dressing room. Before I go on stage I always have to have at least five minutes all alone in absolute concentration.

We heard you perform “Se come voi piccina” from Le Villi by Giacomo Puccini in the Regine, Sante e Femmes Fatales concert streamed from the A. Toscanini Ridotto dei Palchi in Teatro alla Scala, with Michele D’Elia on piano.

Can you tell us about it?

I had already sung it on other occasions. This aria has a very evocative melody, like almost all motifs by Puccini. When I began studying it as a concert piece, I would sing it to myself before I went to bed. It is quite lovely. Unfortunately, the concert had to be recorded without an audience and streamed because of the continuing COVID-19 emergency. It was very strange, partly because the last time I performed in the Ridotto dei Palchi was February 2020 and there was a large audience. I have to say that it would have been much better to sing such an intimate aria—evoking the image of a girl with flowers in her hand sharing her most heartfelt words with her lover—before the warmth of an audience.

If your children were to decide to follow in your footsteps, would you encourage or discourage them?

I would encourage any path that my children choose as long as they set forth with awareness and dedication. My work is not always easy, the calendar of an opera singer may be filled with events, but there may also be lulls. You have to know how to face these pauses with patience and, most importantly, how to take advantage of them to further your studies and development. I think COVID-19 has taught all of us the great value embodied by such a career: to be able to arouse emotions, tell stories, and showcase an invaluable cultural heritage so richly represented in our country.